> Blog > News of the Electronic Cigarette > Is diacetyl in vape juice ?

Is diacetyl in vape juice ? 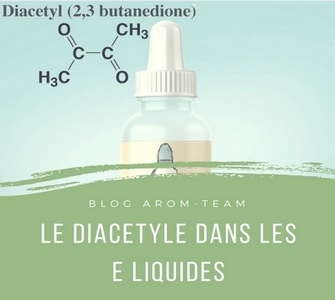 Component of certain food flavors, diacetyl poses a health problem when inhaled.
At the origin of a respiratory disease, it raised many controversies when it was present in electronic cigarette products.
But that was before.


Diacetyl is a component of food flavorings giving a buttery taste
Respiratory disease was detected in US workers at a popcorn factory
Inhaled diacetyl appears to be the direct cause of bronchiolitis obliterans
Decried in the electronic cigarette, diacetyl has however been banned from its products for a long time now

What is diacetyl in vaping?

Alerts on the components of the electronic cigarette are regular.
Each media goes about its speculation about their harmfulness often without trying to understand what can be hidden under oriented studies or conclusions of an aerial science.

But in the end, the vapers come to wonder if using the ecigs is not as dangerous as smoking.

In the absence of explanation, alarmist news spread across the net and the media have their effect on the perception of those who already question the benefits brought by vaping.
However, there are already clear answers regarding the presence of diacetyl in e liquids and its possible damage on health.

This is what Arom Team will discuss in the following points:

Diacetyl, also known as 2,3-butanedione, is a component of food flavorings, a yellow liquid used in the composition of creamy flavors and buttery taste.

It is naturally present at a very low concentration in dairy products, beer, coffee, honey and fruits.

Over the years, scientists have been unable to determine how diacetyl impacts health and especially the human respiratory system. Is it in direct contact or with the exposure of a volatile mixture breathed that can lead to bronchiolitis obliterans ?
Nothing is defined.

An alert is launched for the workers exposed to the flavors during the production and packaging of food products.

If diacetyl seems to be of no concern when ingested, the precautionary principle is applied when inhaled.

What is Popcorn Lung?

They also point to the fact that physicians rarely link diacetyl exposure with the detected disease, treating their patients for what they consider to be a simple shortness of breath or asthma when they are symptoms of popcorn lung.

In 2000, eight cases of irreversible respiratory disease were reported by the Centers for Disease Control and Prevention (CDC).
The eight affected people were workers at a popcorn factory in Missouri. The eight suffered from a lung disease, obliterative bronchiolitis, very quickly named "pop corn lung".

Clearly, these workers had inhaled huge amounts of a diacetyl powder. And the scientists then demonstrated that diacetyl attacks the bronchioles that bring air to the alveoli, the very definition of bronchiolitis obliterans that has no treatment and leads to lung transplantation.

Subsequently, other cases of this diacetyl popcorn lung disease have been found in workers of various industries, including those using flavorings.

By dint of lawsuits brought by people affected by this occupational disease, this chemical was supervised by the public health authorities (fda) and the order was given to remove diacetyl, especially in popcorn factory.

By deepening the research, the scientists could not reach a definitive conclusion on the incidence of diacetyl popcorn lung because if some patients actually had bronchiolitis obliterans, others escaped this sinister diagnosis.
Especially since the disorders reported by some were closer to the chronic obstructive pulmonary disease (COPD), a mixture of emphysema and chronic bronchitis that develops in the long term, that obstructive bronchiolitis (BO), which is a sudden illness.

Does cigarette contain the most amount of diacetyl?

Note that conventional cigarettes produce a significant level of diacetyl.

A study conducted in 2006 on the toxic compounds of tobacco cigarettes determines a rate of 335.9 micrograms of diacetyl per cigarette.

Thus, a smoker consuming one pack of cigarettes per day inhales about 6718 micrograms of diacetyl.

In comparison, an e-cigarette study conducted in 2015 determined that the diacetyl coming from an ecigarette cartridge is rated at 9 micrograms.

Thus, vaping one cartridge per day is inhaling about 9 micrograms of diacetyl.

In this regard, exposure to diacetyl is 750 times higher by smoking than vaping.

Does diacetyl in e liquid cause popcorn lung?

Diacetyl vaping is a recurring theme put forward by the "anti-vape" to discredit the positive impact of the ecigarette on health.

Nevertheless, to date, no vaper in the world has developed bronchiolitis obliterans.

And to go further, we can also point out that no smoker in the world has ever developed bronchiolitis obliterans.

Does this mean that vaping products containing diacetyl are not dangerous?

We will not affirm it and of course recommend avoiding certain chemicals, including diacetyl but also acetyl propionyl (2,3-pentanedione) which has the same risks as its famous "chemical rival" without being exposed mediatically.

Nevertheless, e-cigarette users have no difficulty in drawing a parallel between the beneficial risks potentially incurred with an electronic device and the proven risks with cigarette smoke.
They know that vaping is in every case less dangerous than smoking. And more than knowing it, they feel it.

Should we write that vaping is totally safe?

No, we don't, except for smokers, ex-smokers and future smokers who find or will find in this device an alternative way not to expose themselves to the thousands of substances contained in cigarette smoke.

In this logic, we can then say that a vaper exposing himself to diacetyl today will do it 750 times less than a smoker and will still preserve his health.

Is diacetyl banned in vape juice?

Since 2013, the "diacetyl affair" has spread through the media regularly, waving the red flag of fear to dirty the ecigs via vape juice ingredients.

But it is forgetting the concerted action of the users themselves who have always fought not to introduce or eliminate potentially harmful substances in the vape ingredients.
And the "popcorn lung" was one of their major concerns as soon as they were informed.

Also, the manufacturers of e cig flavors as much as the designers of e liquids were summoned by them to make a scrupulous sorting in the marketed products.

The french AFNOR standard applied today to e liquids and developed in 2014-2015 only hovers over the subject of diacetyl, which was then considered to be treated.

Even the president of Aiduce (french users association) at the time, Brice Lepoutre, pointed out in January 2015:


"Cleaning in e-liquids is already well done upstream. I am thinking of, for example, diacetyl in e juice which has been removed in the past. "


In the same way, the most famous flavor manufacturers used for vaping have completely eliminated diacetyl flavor.
They have even gone further by also attacking acetyl propionyl to no longer find it in e cig juice ingredients, whether commercial or homemade.

The best example of this approach certainly goes to Capella Flavors company who has not hesitated to purge from its dubious ingredients its famous custard flavor to allow diacetyl and acetyl propionyl free e juice.

- Is diacetyl in all vape juice ?

In 2021, talking about the danger of diacetyl e liquid makes no sense.

- Is there diacetyl in vape juice ?

When a product is launched or when the vape juice flavors used in DIY come from companies specialized in vaping products, diacetyl is banned and no longer enters their composition.

For this reason, there is no need to find diacetyl vape juice list because there is no e juice brands with diacetyl.

This blog is copyright ©2023 by Arom-Team. All rights reserved